My Guide to being a Woman and a Mom. 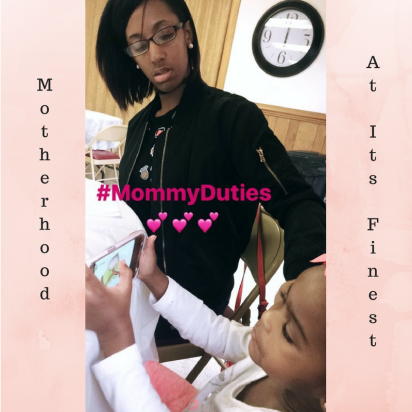 I am a mother to a beautiful two year old, but many of you knew that. What you didn’t know is that my daughter can drive me up the wall majority of the time. My daughter can sleep so peacefully at night after a moment of  procrastination or calling my name continuously just because she doesn’t want to go to sleep yet. My daughter tends to receive multiple compliments on how beautiful her hair is but little do people know it took an hour refresh her hair because she doesn’t want to sit still. My daughter is a baby genius (in my eyes) but she’s wild! She’ll jump off her slide or ride it the wrong way and likes to be rough.  I  could tell my daughter not to potty on herself and she would still go to the bathroom on herself! My daughter gives me a run for my money every single day. From her sassiness to being sensitive my daughter is one of a kind. She’s becoming independent and do things herself most of the time.  I wouldn’t trade my daughter for the world. She’s my greatest redemption and reason to keep going and go beyond the bars I even set for myself. My daughter is my super hero.

I am a mother. I go through every emotion I can think of. Being a mother has truly test my patience, my faith as well as my ability to be the mother I know I am. It doesn’t matter how many articles you have read, classes you’ve taken, and the multiple conversations you have with other moms, you will never be prepared for motherhood. There is no room to be weak because motherhood will walk all over you. Motherhood is such a beautiful experience but it has the hardest lessons with very rewarding feelings. We have to be tough and understand that there will be highs and lows as a mother. I’ve made so many mistakes but I’ve learned from each and every one of them. I’m going to show my daughter that she will be strong, she will be successful, and will never quit without fighting first. She will know that I will be her number one supporter. Motherhood isn’t always about the glitz and glam. The beauty of being a mother is absolutely amazing but it can be very ugly. You have to love the flaws of motherhood just as much as you love the great things that comes with being a mother. If I was asked years ago if could I see myself as mother at my age I would’ve gave a look and simply said “Yes, after I’m done with school and making money.” Life has an interesting way of going about things. I wouldn’t trade being a mother for the world because I would not be who I am today if it wasn’t for becoming a mom. Cheers to motherhood!